One Way or Another

Isn't it hard to wait sometimes? I waited to talk about this quilt for 9 months! I designed this quilt for my Sister when I found out she was having her first baby. I know, she was the one who did all the 'real' waiting. And it was worth it!

So Miss T (aka Baby W) this one is for you!
One Way or Another
by Auntie Michelle
I found out back in January that it was going to be featured in the August/September issue of McCalls Quilt Quilts . It was a hard secret to keep! I really wanted to show everyone, but I also wanted it to be a surprise. The only folks who saw it were a few of my PMQG friends and the talented Jolene Knight of Good Knight Quilts who quilted it.

The inspiration for this design was to create something fun and playful. I started by playing around with the arrow shapes which are made with uneven HSTs. The other concept was to make this using the same block and rotating it. It was a bit of a puzzle but I finally figured it out. Oh, and I admit the name of this design was influenced by a certain song that I've heard a few million times (love ya Blondie!)

The magazine will be available on July 2nd and you can get it online now! This is my second quilt for McCalls. The first one was Fast Fun Flannel featured in October/November 2012 issue. 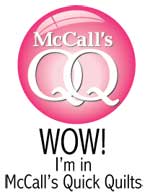 Posted by designcamppdx at 6:54 PM