Why is it that sometimes the things that seem the easiest also tend to be the most difficult? I spent my spring break trying to figure out how to make a quilt block. If you have done this before please let me know, because I am starting to think I might be a bit crazy! Okay, we already knew that, but seriously... a week for a simple (looking) block? Who knew!

Two months ago, Cathy Miller, co-founder of Michael Miller Fabrics, presented their new collection of Couture Cottons at the Portland Modern Quilt Guild. Thanks to Violet Craft (of Peacock Lane fame), they donated fabric for a guild challenge. We were challenged to make a 15 1/2" x 18 1/2" block using the fabrics and 16 of those blocks would be chosen to be featured in a quilt and shown in the Michael Miller booth at Quilt Market. Well, that sounded like fun so I kept an open mind and waited for inspiration to strike. That moment happened on a walk on the promenade in Seaside, Oregon. 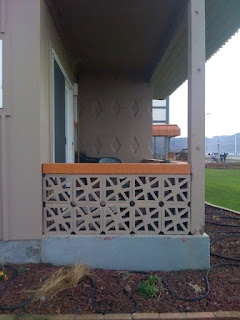 Originally I noticed the cinder blocks in the wall in the foreground of the photo (those of you who know me know I have a weird obsession with cinder block bricks!) but then I started to stare at the wall in the background. I played around with the math in my head and in my mind it worked swimmingly. I was excited to get home and make the block.
The block needed to be precise, so I drew my plan using Adobe Illustrator. I created a page that was the finished size of the block (meaning no seam allowances) and built the block pieces to the sizes I thought would work. My theory worked perfectly and I moved onto a test block. 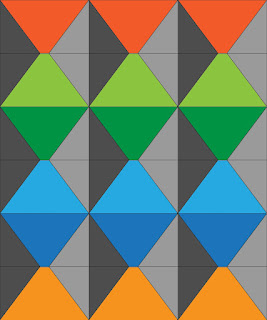 The plan was to cut 3 1/2" x 6 1/2" strips (or bricks) and use a quarter square rectangle technique for the grey triangles that fellow guild member Rachel Kerley had demonstrated at an all day sew. The technique was a bit of a brain tease, but it was really fun once I got the hang of it. The only problem was the rows kept coming out 1/2" smaller than planned. I was baffled so I decided to make a template. Same thing happened. I checked and rechecked my seam allowances but they measured out to 1/4". I showed the block to Nancy Stoval and Susan Beal and emailed my cousin Jan and pulled out my go-to Barbara Brackman book for help. I was getting frustrated so I gave up for the day. The next morning I decided to try adding 1/8" all around to my template. It didn't make sense mathematically but sometimes in sewing you have to add a bit of ease. I held my breath and sewed the row together. Success! It worked! But... The second time I made a row it shrunk 1/2" again. Huh? 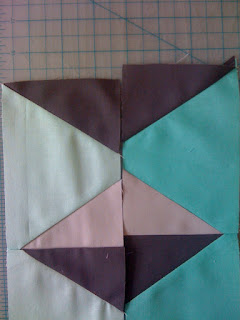 I desperately wanted to figure this out but I was ready to quit. It was just a quilt block afterall. I could make a similar block using tumblers or flying geese but the fact of the matter was I would still HAVE TO DO THE MATH! Grr. The good news was that the guild had a second 'improv block' challenge and I now had plenty of scraps to cut up and use for that. Then it hit me. What if the fabric shrank slightly on the cross grain? I had cut some of the pieces with the long side on the length and some with it on the cross. Could it be? I did an experiment and by golly it was! The fabric seemed to shrink more when I cut it on the cross grain. Strange, I know - but that solved the problem.

To celebrate I made two improv blocks with my left over scraps.

Susan also has a terrific tutorial for how she made her challenge block on the PMQG blog. When I finished my block I texted her a picture of it. She wrote back that her husband said it was Bad-a**. Therefor I have aptly named my Seaside block the Bad-a** block. I have posted the template I made for it here. If you want to make this and have any questions please let me know. I certainly have had alot of practice making it! And, if you want to see what other guild members are making check out their work in the PMQG flickr group. They have come up with some terrific designs!

PS I did a little presentation on improv at the last PMQG meeting. There are some photos and slides from that posted here.
Posted by designcamppdx at 11:38 AM